Just a quick update before I go to bed. Data is beginning to come in off tonight's run of computer models.

So far NOAA's global forecast model, the GFS, is in. If you are hoping for snow early next week in southeast Missouri, extreme southern Illinois, western Kentucky and northwest Tennessee I suggest you look away. This isn't pretty.

Here is what the GFS is suggesting for 12pm CT Monday. 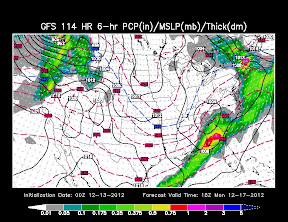 Yes, the model is moving the low pressure area through the Mississippi River Valley quickly. It suggested the same thing on this morning's run as well.

The other thing to notice is the lack of precipitation on the north/northwest side of the low. In fact, you could say there isn't that much moisture with the storm at all.

So what does this mean? It means that this computer model says there won't be any snow, and for that matter rain, Monday or Tuesday next week.

Be sure to check back tomorrow. I'll try to update what the European forecast agency's computer model is suggesting.