I have always enjoyed looking up in to the sky. Whether it be day or night, there are always things to find up there.
Take a look at this amazing video shot by Randy Halverson of the Milky Way. Enjoy.

One of the challenges in making this video, was trying to get good storm with stars shots. The opportunity doesn't come along very often, the storm has to be moving the right speed and the lightning can overexpose the long exposures. I had several opportunities this summer to get storm and star shots. In one instance, within a minute of picking up the camera and dolly, 70mph winds hit. One storm was perfect, it came straight towards the setup, then died right before it reached it.

At the 1:57 mark a Whitetail buck came in to check out the setup. It was caught on 20 frames, and was there for about 10 minutes. It was only 50 yards from the camera, dolly and light.

At the 3:24 mark, a meteor reflects on the water of the small lake, see still below in Photos. There are also quite a few other meteors in the timelapse.

This was all shot in central South Dakota from June-August.

It's that time of year. Wild swings in temperatures every couple of days. The battle of the seasons is beginning. 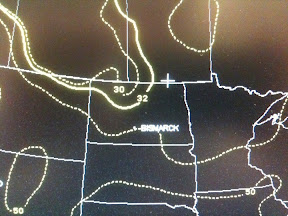 Take a look at temperatures from this morning. The below freezing line crossed the U.S./Canadian border. Where's Homeland Security when you need them? Haha

A cold front is moving through the Midwest today. Yesterday, ahead of the front, highs climbed in to the 90°'s. Today, temps are being held down in the 60°'s.

And He's On It 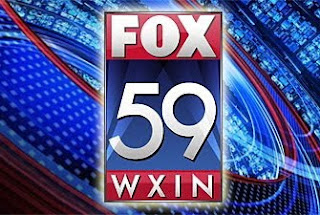 In the words of the late Indianapolis Motor Speedway public address announcer, Tom Carnegie, "And he's on it."

Yes, that is right. I am going to be back on the television giving you the latest forecast. You can watch my forecast starting this Saturday on Fox59 News at 10 on WXIN-TV in Indianapolis, Indiana.

I will be working as one of the weekend meteorologists at the station for three weeks this month.

Don't worry, if you don't live in central Indiana and can't get the station on television, they stream their newscasts live on their website - www.fox59.com. Keep in mind that Indiana is in the eastern time zone. The 10pm ET news will be on at 9pm ET in Missouri, Illinois and western Kentucky.

Currently scheduled dates I will be on Fox59 News at 10:
I am excited for the opportunity to work on-air for Fox59. Having grown up in central Indiana I always watched the weather people on the Indianapolis television stations. So this fulfills a goal I have had since I was 15 years old. That goal, to get on-air as a weatherman in Indianapolis.

I am not a total stranger to WXIN. During the summer of 1997 I interned in the weather department with the station's chief meteorologist, Brian Wilkes. After the internship ended they couldn't get rid of me. I stuck around and helped out in the weather department when storms would move through the state. In many ways I became an apprentice to Brian. Most of my forecasting "know how" has come from him.

After college I was looking for a weather position at a television station. Eventually, I was offered the position at KFVS-TV in Cape Girardeau, Missouri. However, there was a three month period between college and my start at KFVS. To fill the space I worked as a sports videographer for Fox59. It was a lot of fun as I was able to cover the Indianapolis Colts, the Indianapolis Indians, the NHRA Bud Shootout, PGA golf, college football and high school football. 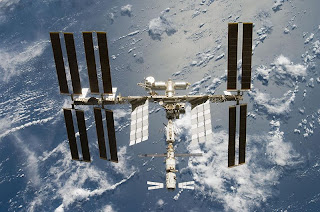 It will be passing overhead this evening and you can see it with your own eyes. Yes, another viewing opportunity for the International Space Station in the Midwest.

Grab the family (especially kids) and head outside and take a look up in to the sky and see it pass overhead.

To see it, use the information for the various locations listed below and go outside. Look in the specific direction just above the horizon. Look for a dot that looks like a star but is slowly moving. It will initially start out dim but will get brighter and brighter. It may even look like an aircraft but it won't have flashing lights.

Tip: When trying to spot it in the sky. It won't be visible a couple minutes ahead of the listed times. It will appear at the time listed. If you see something that you think is it five minutes before, it is either a star, a helicopter, and airplane or a UFO (haha).

Viewing Time:
A couple of years ago I took a picture of the space station during one of the viewable fly-overs with my iPhone. It looked like a dot in the picture but when I zoomed in on the picture I could see the shape of it. I am not sure what it would look like with binoculars or a telescope but I imagine you would definitely be able to see the shape.

Information about the international space station.
If you go out and see it, leave a comment and tell me what you thought of it.
Posted by: John Dissauer at 9/02/2011 08:38:00 AM 4 comments: