The latest high-resolution 12km RPM computer model (0z) is in.  If you are looking forward to snow, you will fall in love with the snow projection it is showing.

The following shows the snow accumulation through 6pm CT Wednesday. 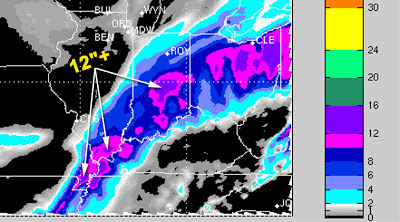 As we get closer to the event we are going to be able to narrow down the areas that will see snow.  That is what this model is doing.  Instead of having wide areas of the Midwest under snow it is able to try and project more minute details.

I can also show you a projection for specific locations from the 21z run of the RPM.  One thing to keep in mind concerning the 21z run.  I am not a fan of the 21z run of this model.  My experience with the model is that it tends to flip-flop around quite a bit.  The run also doesn't initialize using upper-air data.  So take it with a large grain of salt.  However, the 0z run (shown above) does initialize with upper-air data.

HPC is upping it's probabilities as far as snow accumulations.  They have now included the 8" or greater and the 12" or greater products.

The probability for 12" or greater may not sound large, 10%, but that is still significant.  All along I have thought someone would see a foot of snow and I think that is still going to be the case.  It might be near impossible to know where a foot of snow will fall until the event is already underway.

By looking at the snow accumulation projection and HPC's maps, you can get a sense for the direction the surface low will be taking.  It will ultimately track from southwest to northeast.  HPC also provides a map that tracks where computer model projections take the areas of low pressure.  The next map plots the location of the low at 12 hour increments.

Each one of the colored icons indicate where a model run has the surface low.  The colors indicates the time of the location.  When you average out each of the locations you can get a better idea of the overall track.  The current track by the ensemble is nearly a perfect track for big snows in southeast Missouri, southern Illinois, western Kentucky and south/central Indiana.

Timing... The storm should start to impact northeast Arkansas and the Missouri bootheel first.  Data suggests that snow will start to fall Tuesday evening with snow rates 1" per hour.  The RPM projects that the accumulating snow will reach the Illinois/Kentucky border Tuesday night and reaching the Indiana/Kentucky border just before midnight Wednesday.

Again, I can't stress enough that the timing will likely wiggle around as will the track.  As the track of the storm changes, so will snow amounts.

One thing I haven't mentioned much about is the wind.  Winds will be blowing perhaps 25-35mph with higher gusts.  This could create near-blizzard if not blizzard conditions.

Anyone with plans to travel Tuesday evening or Wednesday in southeast/east Missouri, southern Illinois, western Kentucky, northwest Tennessee, northeast Arkansas, south/central Indiana and western Ohio should pay close attention to the forecast over the next 24-36 hours.

John thank you for the work you do for us :) I have to have my son back to Ft. Campbell KY sometime Tues. and be back to the Cape area. I am guessing we should probably do that in the a.m. hours. Have a merry Christmas!

As we will be traveling through southern Illinois from Cape to Henderson, Kentucky, I really appreciate your blog! We are scheduled to return late Tuesday evening. We will be watching for updates to know if we need to head back to Cape early. Thanks, John and have a Merry Christmas!!