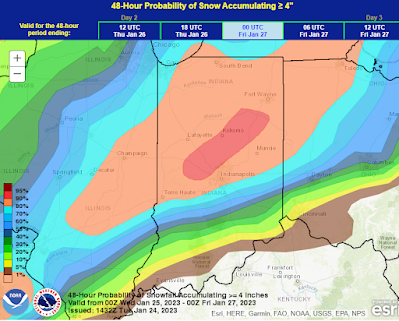 When looking at an 8" or greater snow they include a large portion of central Indiana in a 40% to 60% probability just north of I-70 and I-69. 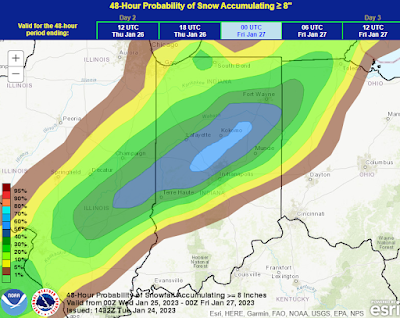 The latest 131-computer model average suggests the following for locales in Indiana.

A note about the type of snow that will fall Wednesday. It will be a heavier wet snow than what has fallen previously this winter. Snow to water ratio's of 8:1 to 10:1. That means it will be a good packing snow (snowballs/snowmen) but also means this is more of a "heart attack" snow. Be careful when out shoveling!

Prospects of a White Christmas in central Indiana this year

A lot of people starting to ask about the prospects of a White Christmas in central Indiana.

Meteorologists define "White Christmas" as having 1" of snow on the ground at 7am December 25.  Historically, Indianapolis has had a White Christmas 28% of the years since 1899.  The last White Christmas was 2017 and the city has only had it two out of the last 17 years.  So you could say we are overdue for snow Christmas morning.

Let me just say that it too early to say with any certainty if there will, or won't be, snow on the ground for Christmas.  Considering it takes just a few hundredths of an inch of liquid to produce 1" of snow (when it is very cold), it is impossible to forecast this far in advance.

That being said, I have taken a closer look at the long range global computer model ensembles.  Specifically, the ECMWF, GFS, and the CMC.

If you don't know, computer model ensembles are a combination of computer model runs.  Instead of running just a single forecast, the computer model is run a number of times from slightly different starting conditions. The complete set of forecasts is referred to as the ensemble, and individual forecasts within it as ensemble members.

The three ensembles - ECMWF, GFS, and CMC - result in a total of 100 different forecasts, or ensemble members.  Out of the 100, 75 members suggest there will be at least 1" of snow on the ground 7am December 25.  It should be noted that is a 6.3% decrease from Tuesday night's runs.

The images show the various members of the ensembles. 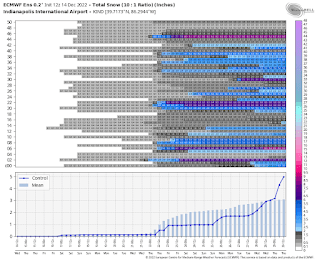 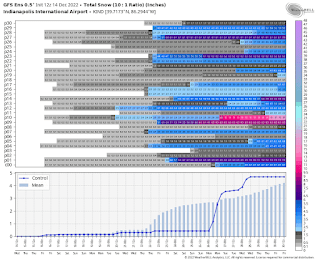 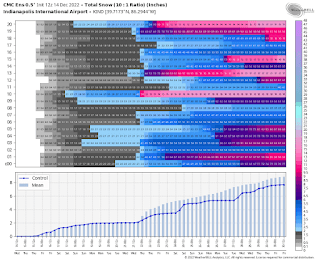 Keep in mind this is just one instance of runs.  This is going to, and likely will, change every six hours as more data becomes available.

One thing that is looking more and more likely is a blast of cold air coming to the Midwest late next week.  For more on that, visit my FB page and scroll down to the previous post.

Let me know what you are hoping for Christmas.  A White Christmas or not. 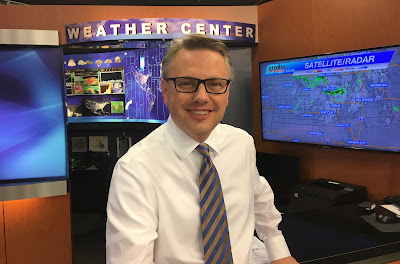 This decision did not come hastily. I have been contemplating it for over a year and made the decision at the beginning of the year.
I have thoroughly enjoyed working evenings with Rod Fowler and Megan Conway and most recently in the mornings with Andrew Ward and Katrina Sperl. I have also enjoyed working with the talented team of meteorologists amassed during my time at the station.
I had several goals I wanted to accomplish when arriving at the station in August 2020.
I like to think those were met and accomplished.
Finally, I want to thank everyone in Nebraska for welcoming me into their homes and always saying hello when meeting me out and about. Also, thank you for not getting too angry with me when I had to cut-in to programming, wiping out your television shows. Just know, I did it to try to keep every person – regardless of what city they reside – safe.
Additionally, after nearly 23 years, now is the right time for me to get out of the tv weather business.
This does not mean you could not see me filling in a time or two at a station in the future because I still have a love of weather. And I will continue to post weather information on Twitter (@JohnDissauer), Facebook (/DissauerWx) and here on my blog.
What’s next… I am now looking for new career opportunities outside of the television and weather business. (If you know of any opportunities you think would be a good fit, send me a message!)
Posted by: John Dissauer at 8/24/2022 10:36:00 AM 3 comments:

Saharan dust getting closer to the United States

By now you have probably heard talk about a cloud of dust moving across the Atlantic Ocean that originated from the Saharan Desert in Africa.  The large area of dust is just about to reach the Gulf of Mexico.

This is a visible satellite loop over the last 6-hours this morning, ending at 10:50am EDT.  If you look towards the Caribbean you can see the brown colored cloud.  That's the dust!  Look at how far it stretches from nearly the Gulf of Mexico all the way off the screen.  Thousands and thousands of miles.


The dust will help inhibit tropical storm development over the Gulf of Mexico.

NASA computer models project some of the dust could make it to the Midwest as we get towards the end of the week and in to the weekend.  That could make for some very pretty sunrises and sunsets.

For more on the dust layer and tracking it by satellite, check out this page from the Cooperative Institute for Meteorological Satellite Studies at the University of Wisconsin.
Posted by: John Dissauer at 6/23/2020 11:18:00 AM No comments:

The latest Drought Monitor classifies 70.5% of Indiana as D0 (Abnormally Dry).
A lack of rain since June 5 is starting to show when looking at lawns around central Indiana.  What was once green grass is now turning brown.  Look under the grass and you can see soil drying out. 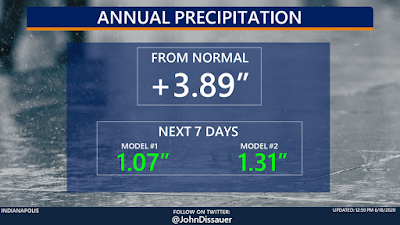 A 2-computer model average suggests 1.19" of rain falling through the next seven days.  That equates to 117% the normal for the period.

A couple things to keep in mind:

What does this all mean?  If you want to have green grass, or revive your brown, it is time to start watering.  I wouldn't count on Mother Nature to do it for you anytime soon.
Posted by: John Dissauer at 6/18/2020 01:36:00 PM No comments:

Lack of rainfall in the Midwest

Taking a closer look at regional precipitation data.  It is easy to see the have's and have not's, as well as the path Cristobal took through Arkansas, Missouri, Iowa, and Wisconsin. 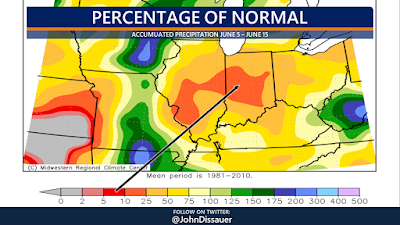 The map shows the percentage of the normal accumulated precipitation from June 5-15.  Parts of Indiana and Illinois are running 5%-10% the normal rainfall according to data from Midwestern Regional Climate Center.  Some locations are even 0%.  Example: Indianapolis has only had a trace of precipitation for the period. 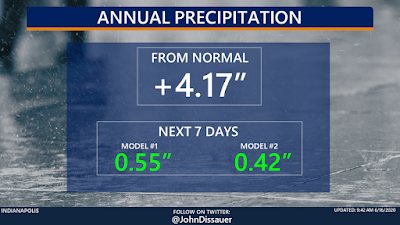 Humidity will begin to quickly drop once a backdoor cold front slides through central Indiana.

Dew point temperatures were in the middle 50°s Saturday morning.  They are forecast to drop in to the 40°s by late afternoon and evening. 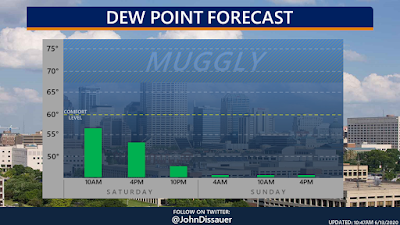 Interesting to note that the HRRR (computer model) takes the dew point down to 31° in Indianapolis tonight. That would shatter the record low dew point for the date since 1942; 36° in 2012.