Storm Prediction Center has put out a "Slight Risk" for severe storms in parts of Missouri, Illinois, Kentucky, Tennessee and Arkansas. 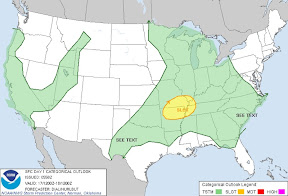 Storms will be capable of producing large hail & damaging wind during the afternoon & evening.

It is warm, it is muggy and it is spring. Know what that means? Yes, we could see some thunderstorms bubbling up this afternoon across parts of Missouri, Illinois, Indiana and Kentucky.

There aren't any strong features moving through the atmosphere to indicate we'll see widespread severe weather but the Storm Prediction Center has put out a "Slight Risk" for parts of the Midwest.

The outlook is valid through 7am CT Thursday.

The main threat appears to be large hail from a few storms that develop. A couple thunderstorms could also produce some gusty winds.


The model starts thunderstorm development around noon for south-central Missouri. A couple of stronger cells are indicated by the model in southeast Missouri and southern Illinois around 3:00pm CT.
Posted by: John Dissauer at 3/14/2012 10:17:00 AM No comments:

The Storm Prediction Center has issued Tornado Watch #57 that is in effect for parts Indiana, Illinois, Kentucky and Missouri. The watch is in effect until 7:00pm ET/6:00pm CT.

This is a PDS Tornado Watch. PDS stands for Particularly Dangerous Situation.

In the discussion of the watch product issued by SPC, they say "...A volatiles environment is developing across the northward expanding warm sector...". They also mention the possibility of strong, long-tracked tornadoes.

I hate to say it but looking over the atmospheric ingredients, southeastern Illinois and western Kentucky are looking explosive for thunderstorm development between 11am-1pm CT.
Posted by: John Dissauer at 3/02/2012 10:53:00 AM No comments:

This will be quick as I'm about to get some sleep...

The Storm Prediction Center has just published their latest Day 1 Outlook that is valid through 6am CT Saturday. 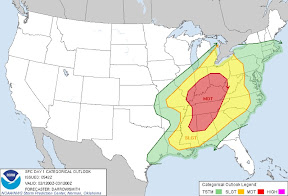 Where storms finally decide to initialize or start will be key to how things play out tomorrow.

I wanted to give you a look at some of the data I am looking at. This is an interesting projection of what one of the hi-res 4km computer model products. It tries to simulate what satellite imagery will look like over the next 24 hours (6pm CT Thursday - 6pm CT Friday).


It still appears the biggest risk of tornadoes exists for central Kentucky and north-central Tennessee by late afternoon/evening Friday.
Posted by: John Dissauer at 3/01/2012 11:18:00 PM 1 comment: 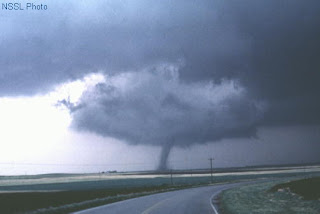 Updated: 9:22pm - The National Weather Service in Paducah and St. Louis continue to conduct surveys of areas that have been hit by Tuesday's storms. Several tornadoes have been confirmed.

Below a breakdown of the storms that affected southeast Missouri, southern Illinois and western Kentucky.

Wanted to add an additional thought concerning tomorrow's potential severe weather. I have to give credit to the National Weather Service forecast office in Paducah for bringing up this idea. The cap. Yeah, a cap like the ball cap you wear.

The cap is basically having warm air aloft that keeps parcels of air from rising above a certain level. The cap is often at play during the summer when it is warm through the air column. It is in place when you go outside and watch clouds build up. They keep going and going, but then all of a sudden they seem to just stop and they don't become much. BUT, there's that one cloud that has enough "oomph" to break through and explode upward eventually becoming a decent thunderstorm.

Both the NAM and GFS models are predicting that a cap will move in for southeast Missouri, southern Illinois, western Kentucky and central Indiana behind the warm front.

When looking at the below numbers, the lower the number, the stronger the cap. (Look carefully, the numbers go negative.) 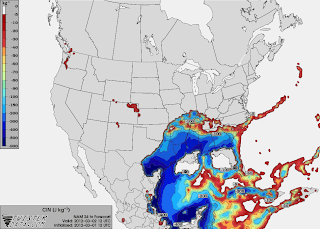 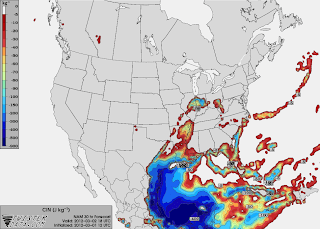 You can see that the NAM begins to erode the cap as we go through the day. 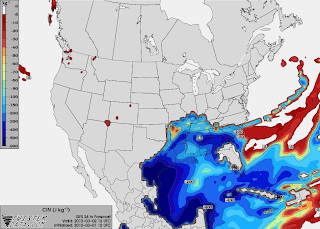 Again, props to the forecasters at the Paducah NWS office for catching that. I hadn't looked that closely to all of the data to catch that detail.

I should also note that this afternoon's high resolution 4km and 12km computer models are backing off on the late morning/afternoon thunderstorm development for southeast Missouri, southern Illinois and extreme western Kentucky.

I think the brunt of the action will be over central Kentucky and central Tennessee. Places like Lexington, Bowling Green and Nashville.
Posted by: John Dissauer at 3/01/2012 04:28:00 PM No comments:

In the wake of what happened February 29 everyone would be happy with a break from active weather. Unfortunately, that isn’t going to be the case.

The cold front that swept through the mid Mississippi Valley Wednesday has stalled out to the south. It is expected to lift north as a warm front later tonight.

An area of low pressure is also expected to develop over the central Plains this afternoon. The computer models are projecting the surface low to quickly deepen (strengthen) starting overnight tonight through Friday evening. The track of the surface low takes it generally speaking from Springfield, Missouri (6am CT Friday) to Champaign, IL (12pm CT Friday) to Detroit, Michigan (6pm CT Friday).

Thunderstorms could fire later tonight along the warm front . The Storm Prediction Center has included southeast Missouri, southern Illinois, western Kentucky, western Tennessee and northeast Arkansas in a “Slight Risk” area for severe thunderstorms in their outlook that is valid through 6am CT Friday.

The main threat from these thunderstorms will be large hail, but damaging wind and an isolated tornado can’t be ruled out.

Attention then turns to the main event coming Friday. SPC has all of southeast/east Missouri, east Arkansas, southern Illinois, Indiana, Ohio and Kentucky in a “Slight Risk”. The “Slight Risk” includes cities such as St. Louis, Springfield (Mo & IL), Cape Girardeau, Memphis, Lafayette (IN) and Paducah.

There is a heightened threat for parts of south-central Indiana, southwest Ohio, western/central Kentucky, central Tennessee, northeast Mississippi and northern Alabama. That is why they have those areas in a “Moderate Risk” for severe weather from 6am CT Friday through 6am CT Saturday. However, the action will likely occur during the afternoon and late evening hours.

The “Moderate Risk” includes cities such as Bloomington (IN), Columbus (IN & OH), Cincinnati, Indianapolis, Evansville, Louisville, Lexington, Nashville and Birmingham (AL). The main threat within the “Moderate Risk” are is damaging winds, strong tornadoes and hail.

The jet stream appears to be very favorable for lifting. Diverging winds at 25,000-30,000 feet will create a void and aid thunderstorm development over southeast Missouri, southern Illinois, western Kentucky, northwest Tennessee and northeast Arkansas. This feature moves in around 5am CT Friday.

I think what we are likely to see is individual thunderstorms developing along the warm front overnight tonight in southeast Missouri, southern Illinois, western Kentucky, northwest Tennessee and northeast Arkansas. These would primarily be “hailers”.

Later Friday morning we will see thunderstorms fire up near the Mississippi River and quickly form a line. The thunderstorms will move to the east at a quick pace. They will begin to mature as they move in to south-central Indiana/central Kentucky and be capable of producing damaging winds and tornadoes.

Thunderstorms can happen at any time of the day and at any time of the year. I saw a message on Twitter yesterday that was perfect… “Tornado season starts January 1 and ends December 31.” This is why I can’t stress enough how important it is to have a working NOAA weather radio at home. Yesterday’s storms proved that. They hit between 3am and 6am. Ask yourself, “If it is the middle of the night how would I know there is a warning?” In my opinion, weather radios are just as important as a smoke detector. EVERY home, school and business should have one. Don’t think about it, just get one!