Heat Taking Aim on Central US 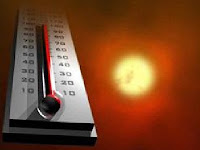 The big weather story this week continues to be the heat taking aim on the central United States, including eastern Colorado.

An area of high pressure in the upper-levels of the atmosphere has taken residence over the central Plains.  Temperatures under and near the high have climbed in to the 90°s and in some cases 100°s.  Along with the high temperatures, humidity is high across the central U.S.  Heat indices (the feels like temperature) hace climbed to near 110° as far north as Minnesota.

The upper-level high will slowly move east over the next 48 hours.  Eventually, it will begin to retrograde to the west.

As the upper-level high controls the weather pattern over eastern Colorado, monsoon moisture will remain over Arizona and Utah.  Later this week some of the moisture will begin to return to the mountains of southern Colorado and eventually the I-25 corridor.  I introduce a chance for isolated showers and thunderstorms for places like Canon City and Woodland Park starting Wednesday.

As of now, computer models are suggesting there will be enough moisture around southern/southeastern Colorado for there to be a chance of showers and thunderstorms.  Also, with the moisture around, skies will be partly to mostly cloudy, especially for areas closer to the foothills.  Temperatures will also be held down due to the clouds and showers/thunderstorms.  Highs will likely be in the 80°s.

The big weather story this week is a late season heat wave taking aim on the central United States.  Record high temperatures could fall anywhere from Colorado to Indiana.

An upper-level high pressure dome will setup shop over the middle U.S. early this week.   High pressure aloft allows for air to sink and compress.  When air compresses, it increases in temperature. 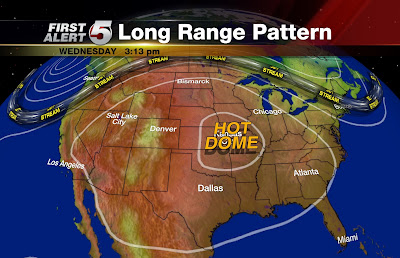 Temperatures will reach the century mark. Temperatures in southern and southeastern Colorado will top out in the upper 80°s to lower 100°s through Friday.

The upper-level high will initially push monsoon moisture west in to western Arizona and Utah and take it away from southern/southeastern Colorado. Later in the week moisture will begin to come back to Colorado. The moisture will allow for a chance for isolated showers and thunderstorms over the mountains west of I-25 starting Wednesday.

As for Monday, expect to see mostly sunny to partly cloudy skies across the KOAA viewing area. Highs will top out in the upper 80°s to upper 90°s. Colorado Springs should top out at 88° and Pueblo should see a high temperature of 95°.

Here is a closer look at what to expect Wednesday afternoon through Thursday evening.