The new Tuesday morning run of the GFS is in. I'm quickly digesting some of the data for the southeast Missouri, southern Illinois, western Kentucky, northwest Tennessee, and northeast Arkansas area.

It still looks like it is going to be a primarily ALL SNOW event for the area. There are a few exceptions to that in northeast Arkansas and western Tennessee.

Here is a view at the data for Cape Girardeau, Missouri: 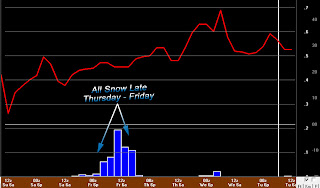 Other points of snowfall amounts:

With this storm the track means everything. There will be a very sharp cut-off of snow on the north side of the storm. A deviation of the storm track of 25-30 miles could mean the difference in getting 0" instead of 6" of snow.

The above numbers are not our forecast. These are just numbers from a computer model.

In your next "how much you may get" blog can you inculde the bootheel region? (kennett for example), thanks john, il appreciate it

Please include Mt Vernon. Do you think the precipation will be far enough north near and east of Mt Vernon Illinois

john where are you at??? I have been waiting on another update......what are you thinking on Cape now that you have more info on the storm

come on lets keep this blog going!!!!!!!!Now is the time to post on everything.Lets have some fun with this WINTER STORM!!!