Round 1 Over; Round 2 Knocking

The snow is coming to an end across the area. There is one final band that is dropping 1/4" to 1/2" of snow as it exits.
For the most part the forecast is working out pretty well. Snowfall amounts are ranging from 1/4" to 4.5" from southern Illinois, southeast Missouri, and western Kentucky. We'll be getting better numbers in as we go through the morning.
I have taken several snow readings overnight and this morning with my Snoopy ruler. (This is the same ruler I have been using for snow measurements for over 10 years.) At midnight I had 0.75". At 5am I had another 1.2". At 7am I had another 0.4". So my total is 2.3". 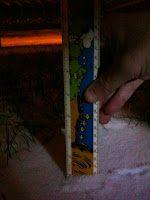 As we have been saying for several days, the snow is just the first part of this storm. The second round is starting to move in.
Northwesterly winds are beginning to pick-up behind a cold front that is pushing all of the snow out of the region. Those winds are ushering in colder air.
Take a look at 7:00am CT temperatures around the region.

Temperatures will most likely sit in the lower to middle teens througout the day as the cold air continues to move in. Winds will increase to 10-20 mph with higher gusts. That will create wind chills to near 0 degrees at times.
Posted by: John Dissauer at 1/07/2010 08:27:00 AM