Is It Going To Blow? 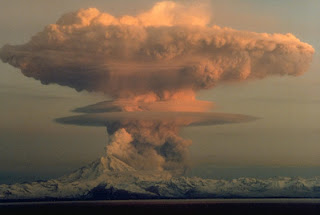 I think everyone is ready for a break from Winter Storm '09. So lets go the opposite direction from a winter/ice storm to an erupting volcano.
Mt. Redoubt is beginning to wake-up in Alaska. According to the Alaska Volcano Observatory the current Volcano Alert Level is "Watch" and the Aviation Color Code is "Orange".
According to their Friday afternoon update, "Unrest at Redoubt Volcano continues, though no eruption has yet occurred. Seismicity levels have increased since yesterday evening and have also risen markedly over the last hour."
You can take a look at Mt. Redoubt on two webcams setup by the AVO.
Mt. Redoubt is located 110 miles southwest of Anchorage, Alaska. 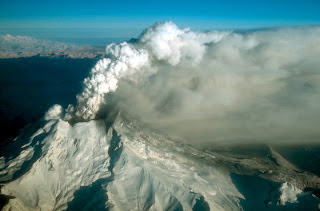 Wow!! Interesting!! I'll have to check in from time to time...the pics when it erupts will be amazing (as long as I am in my Missouri living room and not where this cam is set up.)

What impact will this have on Alaska, and what impact might it have this far south, in our area?

By the way, I am glad for a different topic today. I think I'm on sensory overload from the winter storm.

When I was in the Navy in the mid-70s, I was in the SW Pacific and had a chance to visit sunda strait. I got to see what was left of Krakatoa or Krakatau, two different spellings. It's located between Java and Sumatra and blew itself up in 1883. One of the most explosive volcanos on record. It reduced itself from 40 sq miles to 3 after the eruption. Guess what, It's recreating itself and is called Anat Krakatau. It looks totally desolate because of recent eruptions there....the power of nature...

glad im here in southern ill too bad it isnt a live streamming cam that would be awsome. but ill still be watching it.

I downloaded the Google Earth software the other day and It shows great images of the volcano and Krakatau also.