The day after... A time to reflect on what did and what did not happen.

Overall I am pretty happy with my snow forecast. Generally, we saw 2" to 4" of snow across the KFVS viewing area. A few locations had more, a few had less.

Thanks to the National Weather Service in Paducah, Ky they made it easy for me to look at snowfall reports from around the area. 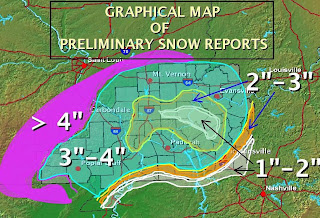 Click the image to see a larger version.
The areas in southern Illinois that saw less than 2" would have been nearly impossible to forecast ahead of time. That would have been more of a "nowcasting" item.

Here is a look at snowfall around the Midwest over the previous 48 hours. 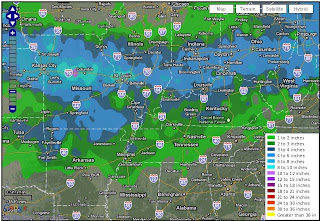 St. Louis was a little problematic. My forecast called for 6" to 7" around the St. Louis metro area. I thought there could be a few spots higher than that especially on the north/northwest side (out of the metro area). In actuality, amounts were higher. They ranged from 3" to as much as 12" in the metro area.

I knew there was going to be a heavy band of snow setting up somewhere, I just didn't expect it to be in that exact spot. I don't know anyone that nailed that part of the storm. If you do know of someone, let me know, I'd like to shake their hand. haha

Starting Monday, three days in advance, I started mentioning a general 2" to 4" snow for the area. I had mentioned to many, not necessarily on my blog, Cape Girardeau would see 2" to 3" of snow. Cape Girardeau ended up with 3". I'm pretty happy with that!

I might be a little biased, so how would you grade my snow forecast? (Scroll down the site to see previous posts.) Leave your grade on the comment section here on my blog.

Looking ahead... Yes, there is a system that could bring the KFVS viewing area more snow Sunday/Monday but I am going to enjoy my last day of vacation and I'll take more looks at the storm tomorrow. (I go back to work tomorrow.)

i think over all john i give u a A- snow storm all hard to predicted you doing a brog give us a way advanced on a storm i really ty for the blog it really helps keep it up thanks a lot Raymond Wagner Sikeston,Mo

I give you an A, John. Great job! I very much appreciate you sharing your forecasts with us on your blog.

I think you do a great job on this blog and when bad weather is predicted I check your blog often because I trust your predictions more than other sources. I give you an A this time.

very well done. it is nice to see someone whose line of work is not work at all.

v. interested in your forecasting for sun/mon. being in the const. industry i v. much like this blog. and being more science minded like seeing how you generate your forecasts...though i will still complain.

do you have an affordable home weather station you recommend?

I give you a 9.5 John. Keep up the good work. I check your blog more than I check the stations forecast. I get a little nervous when you aren't posting! ;)

An enthusiastic "A." I enjoy reading your blog and count on your posts to find out what's really going on with the weather. Thanks for taking the time to post. It's great to see that you enjoy your profession so much. Thank you for keeping us in the loop! Keep up the great work.