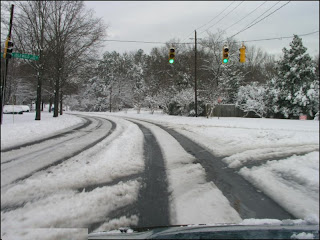 Yes, it may be possible for parts of the Midwest. I'm talking about snow for Valentine's Day.

Morning computer models are indicating a wave of energy could move east across the Mississippi Valley late February 13 through the early February 14.

It is still very early to be talking about amounts, but it does look like there is a chance southeast Missouri, southern Illinois and western Kentucky could get their first "decent" snow so far this winter.

The European forecast agency's forecast model is suggesting there could be 0.47" of moisture to work with. NOAA's global forecast model is a little more bullish with its amount (0.22"). The big question at this time appears to be temperatures. Surface temperatures are looking to be +/- 1° of 32°. So temperatures are on the fence. As of the way it looks to me right now, I would guess that it would be a very wet snow with perhaps an 8 to 1 ratio (snow to rain). If you do the math that could be a 2"-4" snow.

This is FAR from being set in stone. A change in the weather pattern of 30 miles could make a HUGE difference so don't get too excited just yet. We'll keep an eye on it over the next couple of days.

There's always that 30 miles between us and Perryville. I've got my fingers crossed tho!

What are the odds of freezing rain, changing to snow... That would hurt our snow totals... :( but on the other hand say if it just so happens that the temp is 30, would the ratio be similar to the 8:1 you are shooting for?