Just a quick update to the current weather picture.

You may be looking out your window and wondering where all of the snow is at. If you've been following along here on the blog you know that I am not expecting the featured event to get started until later this afternoon and this evening in Missouri/Illinois/Kentucky and overnight for central Indiana.

Here's a look at the latest satellite imagery. 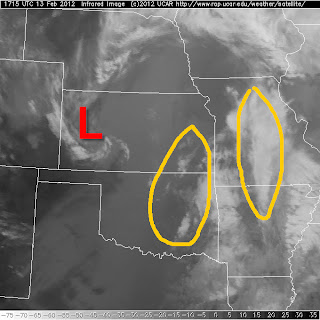 (Click the image to see a larger version.)
I have drawn on a couple features to help point things out. First you can see the surface low drawn on with the red "L". Ahead of that I have two areas circled in yellow. I expect the areas circled to start to fill in and eventually bring some snow our way.

High resolution computer models are suggesting that snow will arrive in the St. Louis metro area around 2pm this afternoon. The area that will bring us the 2pm snow is right yellow circle.

Within the second circle (left), I expect to see that begin to fill in with clouds and eventually moisture in the next couple of hours. This area should bring the "heaviest" snow to the St. Louis area between 6pm and 9pm this evening.

The Hi-res computer models are also picking up on a "blob" of moisture moving in to southern parts of southeast Missouri (Poplar Bluff, Dexter, Sikeston, New Madrid and bootheel) starting around 4pm.

It's been snowing here in clarkton mo for about 30 min now but not sticking :(