Be on the lookout for snow. It has been a rarity this winter across the Midwest. Here's an interesting statistic. As of today, Midland, Texas has had more snow than Chicago, the Twin Cities, Boston or New York City.
So where is all the snow? I can tell you where it isn't. It isn't over the United States (lower 48 states).

Below is a map from NOAA indicating snow depth as of this morning. Notice the lack of snow, even over the northern plains. 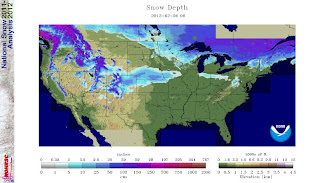 (Click the image for a larger version.)
As of this morning only 26.2% of the United States is covered by snow. This is the lowest amount of snow coverage for this day since 2005.
Quickly looking over weather data from this morning I am not seeing any big signs of snow coming our way in the next week. Perhaps something around February 17, but don't get too excited yet. The models have consistently shown storms capable of producing a good snow 264 hours out almost on every run of the computer models. None of them have happened. Waa waa waa...
Posted by: John Dissauer at 2/06/2012 05:26:00 PM