More data has come in and that means there is more information to digest. Earlier today I showed you what the NAM computer forecast model now let's take a look at what NOAA's global forecast model is suggesting for Monday's "storm".

Here is a bigger picture of the amount of snow the GFS is suggesting.

(Click image to see a larger version.)
Looking at the above image and comparing to the NAM's forecast from earlier today, both models seem to be relatively consistent. There also appears to be a northward shift, not by a lot, in the models. This means that there could be less snow for parts of southeast Missouri, western Kentucky and southern Illinois.

Here's a closer look in to the St. Louis metro area. 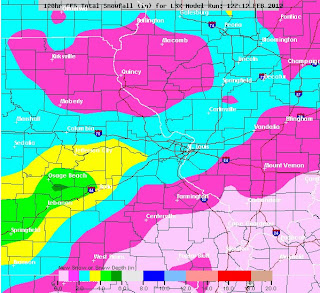 (Click image to see a larger version.)
Similar to the NAM and the previous thinking, the GFS puts the higher snowfall totals over central Missouri. It also supports the idea of 3"-5" of snow.

I am hearing a lot of chatter about snow moving in by late morning for the St. Louis area. I'm not buying that idea just yet. The air is extremely dry. Dew points are currently in the single digits to just below 0°. Moisture is going to have to fall for several hours to bring up the humidity in the air to support moisture reaching the ground. This means we are likely to see a lot of snow appearing on the radar, but nothing reaching the ground. This means the accumulating snow won't start to reach the ground until afternoon (2pm - 4pm).

Here's a look at the southeast Missouri, southern Illinois and western Kentucky area. 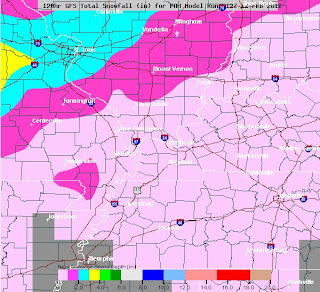 (Click image to see a larger version.)
Unfortunately, if you are wanting snow, the shift to the north in the models is taking the snow away from southeast Missouri, southern Illinois and western Kentucky. The GFS is suggesting a general dusting to 1" of snow with a few pockets of 2". This is partly due to the model suggesting more sleet and freezing rain mixed in as warmer air a few thousand feet move in.

Here is a closer look at central Indiana. 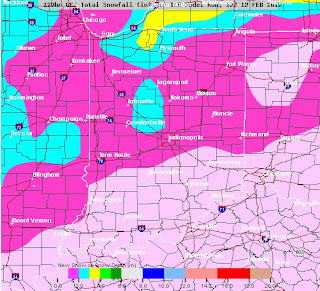 (Click image to see a larger version.)
The GFS is suggesting 1"-3" of snow for central Indiana with the higher totals northwest of Indianapolis.

I mentioned that there could be sleet and freezing rain mixed in with this system. Models are suggesting that initially the precipitation falling from this system will be snow but eventually warmer air will move in a few thousand feet in the atmosphere. This would change to snow over to sleet and depending on how deep the warm layer is, it could fall as freezing rain.

Below is a look at the how much freezing rain could fall (and where) according to the GFS.

(Click image to see a larger version.)
Yes, I do think there could be some freezing rain mixed in for southeast Missouri and especially in northeast Arkansas. Don't get too concerned, it doesn't look like it will amount to a thick coating of ice. But as we all know, even a tiny bit of ice can make driving difficult.

It should also be noted that looking at this morning's European forecast agency's computer model, it has decreased the amount of moisture available for the storm from previous runs. For instance, yesterday's run had 0.19" (liquid) for St. Louis. This morning's run had 0.12". However, it did increase the amount for Cape Girardeau, Farmington and Paducah. This is due to the model shifting the track of the system a little further south.
Posted by: John Dissauer at 2/12/2012 06:16:00 PM

Thank you for keeping us up to date on what's happening!