What's the old saying, "A watched pot never boils"? That's how it is today but instead of watching the pot everyone is watching the radar.

One of the most difficult things when it comes to forecasting is sitting back and waiting for things to play out as you forecast. That's the position I am now. Waiting for snow to start to accumulate. The thing I have to remember is that I figured the snow would start to arrive in the St. Louis metro area between 2:00pm and 4:00pm. There is snow falling, but nothing is sticking yet. It's basically "heavy flurries" right now.

Everyone is looking at the radar this afternoon. If you click on the "Radar" link above and look back over southwest Missouri you might be thinking "There's nothing out there. We're almost done with the snow." That isn't entirely true. 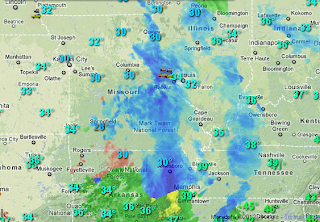 (Click the image to see a larger version.)
The National Weather Service doppler radar in Springfield is down for maintenance today. That means the mosaic/composite radar that everyone uses to show the "National Radar" or the radar imagery that shows rain, mix and snow is missing some important data. The way the composite radar works is by looking at all of the individual doppler radar sites around the country and then, in simple terms, averages them all together to come up with a "big picture" radar view. When there is data missing from an area that is seeing precipitation, it is like taking away a big piece of the puzzle.

It is even more important to have all the radar data possible when there is snow as snow doesn't show up very well at far distances.

In cases when there isn't radar available it is important to look at surface observations to get a sense of what is falling from the sky. At 2pm, moderate snow was reported in Springfield as is the case in West Plains and Rolla.