Here is my snow forecast for Monday through Tuesday for the St. Louis metro area. 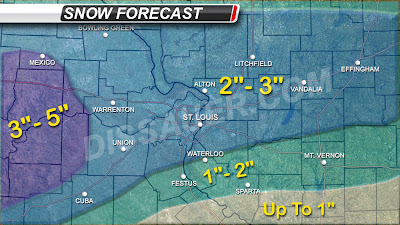 (Click image to see a larger version.)
Generally speaking around the St. Louis metro I am expecting 2" to 3" of snow to fall. There will likely be a few spits of snow through late morning but I don't expect the accumulating snow to begin until mid-afternoon and it should end by 2am Tuesday. Snow showers will be possible Tuesday morning (rush hour +) but shouldn't add to the totals.

Southeast Missouri/Southern Illinois/Western Kentucky:
The forecast will be a little trickier for this area as there will likely be a mix of snow, sleet and freezing rain north to south across the area.
Central Indiana:
I think we are looking at anywhere from 1" to as much as 3" of snow. I think the 3" amounts will be northwest of Indianapolis.
Posted by: John Dissauer at 2/12/2012 09:00:00 PM