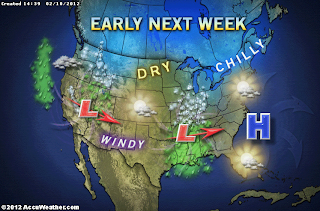 New data is coming in from the computer models this morning concerning the possible snow Monday/Tuesday (Feb 13/14) for parts of the Midwest. I've mentioned the NOAA's global forecast model (GFS) and the European forecast agency's model (Euro) in my previous post.

Another model (the NAM) has come in this morning indicating there could be snow falling. Right now the Monday time frame is on the outer edge of the NAM's forecast range but it is indicating moisture and temperatures that would support snow.

There isn't much change this morning amongst the data. The only thing I am seeing is maybe a slight down-tick in the amount of moisture. At this point it still looks like a couple of inches of snow could fall around the St. Louis metro area (maybe 3"-5" towards Columbia), 1"-2" could fall around central Indiana and maybe 1.5"-2.5" in Cape Girardeau. This isn't necessarily my forecast, just numbers coming straight from the models. These are also likely to change over the next 48 hours.

Here is a look at what the GFS is indicating for 48 hour precipitation (liquid equivalent) accumulation ending at 12am CT/1am ET Wednesday. 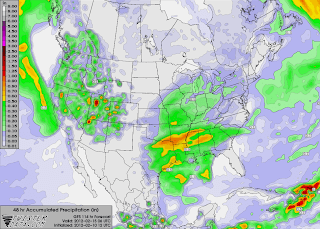 (Click the image to see a larger version.)
This gives a good indication that there isn't a lot of moisture to talk about. However, it doesn't take much to produce an inch of snow.

The one thing that is consistent is temperatures will be borderline. At the surface all of the models are showing temperatures will 30°-31° for most locations I am looking at (southeast Missouri, southern Illinois, western Kentucky, St. Louis, central Indiana). I say "most" because in western Kentucky surface temperatures are 32°-33° at the surface and 33°-35° at 3,000 feet which could limit snow production. This is going to make it really tricky. A shift in the track by even 30 miles will make a HUGE difference in who gets snow and who gets light rain.

With temperatures so close to the edge between rain and snow I'm looking at snow ratios ranging from 8 to 1 to 12 to 1. 12 to 1 maybe a little optimistic. I used those ratios to determine the snow range listed above.