Meteorological Summer has come to an end and the final numbers are in.  How did Colorado Springs and Pueblo fair?  Let's take a closer look and see how the numbers break down. 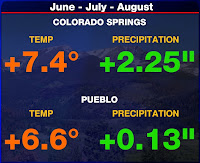