Wet Week Ahead for Colorado 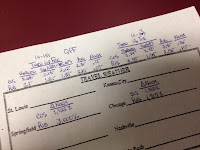 ...Cool temperatures and heavy rain headlines the weather today and much of the upcoming week...

An upper-level low has established itself over the western United States.  Ahead of the low, southwesterly winds are helping draw up monsoon moisture from the south.  The moisture has moved over southern Colorado and will allow for periods of showers and thunderstorms.

Tonight we'll have cloudy skies with scattered showers and thunderstorms.  Computer models are indicating an up-tick in moisture around sunrise tomorrow.  Lows will be in the middle 50°s to lower 60°s.

Expect to see cloudy/overcast skies Wednesday with periods of showers and thunderstorms.  At times, the rain could be heavy.  We'll have to keep an eye on some of the area burn scars.  Highs will be in the upper 60°s to upper 70°s.