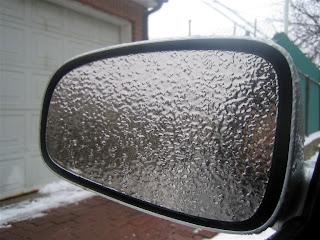 It is beginning to look more and more like parts of the Midwest will see freezing rain and/or freezing mist beginning later today.

The above data shows that it is cold enough at the surface to freeze any kind of moisture falling out of the sky. However, the air a few thousand feet in the sky is something to note.

Right now, at 850mb, or 5,000', the temperature is -3° to -5° over central Indiana. However, forecast models are indicating warmer air will surge northeast and temperatures will go above freezing from Indianapolis south by 6:00pm ET to 8:00pm ET. 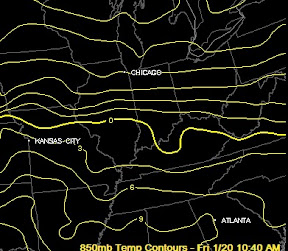 Having the warm air aloft is key as to what type of precipitation will fall. The warm layer will allow any snow to melt until it encounters the below freezing temperature. Since that below freezing air is at the surface, that usually means we are talking about freezing rain. Freezing rain is rain that freezes on contact with the ground.

It is looking like the moisture will start to reach the ground starting around 7:00pm ET - 8:00pm ET. This will coincide with the warm layer of air moving overhead. If by chance the moisture begins earlier, before the warm layer moves overhead, the precipitation will start as snow changing to sleet and eventually freezing rain.

Who will see what? I think from Indianapolis and south will be dealing mainly with freezing rain. Places around Carmel and Westfield will be near the line of where it will be a sleet/snow/freezing rain. North of that area, places like Lafayette, Muncie, Kokomo, should be all snow.

How much freezing rain am I talking about? Forecast models are suggesting anywhere from 0.02" to as much as 0.23". That will be enough to make roads slick and hazardous later tonight. If the higher side turns out to be true, I wouldn't be surprised if there were a few minor electrical grid problems.

It also appears we could see some light freezing rain/mist around the St. Louis area beginning late this afternoon or early this evening. The amount should be light. Probably less than 0.07" but nonetheless, it could put a small glaze over roads.