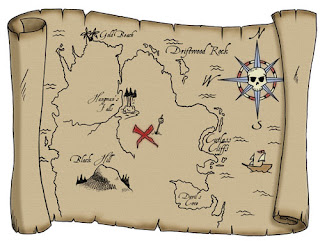 If you step outside in the Midwest it may be hard to believe that we could be dealing with severe thunderstorms late tonight and early Monday morning.

Temperatures at 11am CT range from the 30°'s and 40°'s across Illinois, Indiana, Kentucky and Missouri. However, this will change later today as a warm front lifts through the Midwest. Behind the warm front, warmer, more moist air will begin to stream north on southerly winds. Temperatures are already beginning to climb in eastern Oklahoma, southeast Kansas and southwest Missouri.

The main threat for those of you in Indiana, Illinois and Missouri will be strong damaging winds with a line of storms that moves through late tonight and through the early AM hours Monday. The low-level jet stream is forecast to bring strong winds closer to the surface. The image below shows you a slice of the atmosphere. 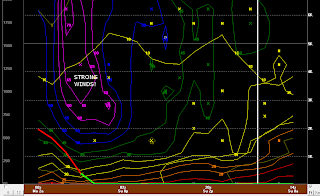 (Click the image to see a larger version.)
The winds are forecast to hit 55 knots to 62 knots at 1,500 feet to 2,000 feet. Any thunderstorm moving through that environment will have the potential of tapping in to the wind and brining it down to the surface. (The above image is for Cape Girardeau, Missouri.)

Now there is going to be a larger threat for tornadoes for part of the Mississippi Valley. They could occur anywhere from northern Mississippi to western Kentucky and parts of southeast Missouri (towards the bootheel).

Often times I like to pick out an initial chase target of where I would go if I were storm chasing the event. Let me first say that tonight I AM NOT chasing nor do I recommend ANYONE chasing tonight as the conditions will not be safe. As for my target... After looking over weather data from the morning computer model runs, I am liking an area in eastern Arkansas. Somewhere between Searcy --> Newport --> Wynne.

Later today I am going to post a page that will allow you to look at radar images from the St. Louis radar, the Paducah radar and the Memphis radar. The images will update every 4-6 minutes as we go through the night.
Posted by: John Dissauer at 1/22/2012 12:24:00 PM