Dry air has arrived in central Indiana thanks to a cold front that has passed through the state. The dew point temperature in Indianapolis dropped to 20° officially at 1 p.m. (12:54 p.m. observation).  This is definitely more February-like air than late April. 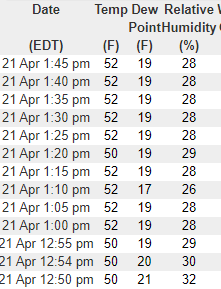 This is extremely rare air.  So rare that this is the first time since 1942 the dew point has dropped to 20° or less between April 21-31 in Indy according to data collected from the Midwestern Regional Climate Center.
Posted by: John Dissauer at 4/21/2020 02:02:00 PM