Coldest temperature for date in 145 years

A second consecutive day with temperatures dropping in to the lower 20°s around central Indiana.  It got down as low as 22° just north of Zionsville!

DID YOU KNOW: This was the coldest temperature for April 16 in Indianapolis since 1875 (it dropped to 21°) - ranking the second coldest for the date on record (since 1871).

ADDITIONALLY... This morning was the coldest temperature in #Indianapolis since March 7. 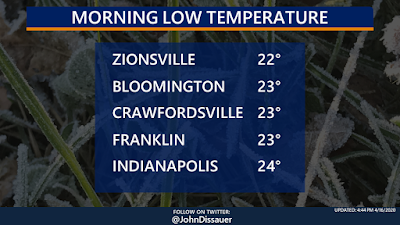