While most people's attention is on the current COVID19 situation impacting the country and the world, I don't want you to lose site of what is happening with weather in the Midwest.

An area of low pressure is projected to move out of the Rocky Mountains tonight and sweep across the central United States.  The low is going to bring energy, along with a couple fronts, allowing for thunderstorm development.  Some of these thunderstorms could be strong to severe Thursday in to early Friday morning.

The Storm Prediction Center has several states included in a "Slight Risk" for severe thunderstorms Thursday morning through Friday morning.

I've tried to narrow it down to an area that the latest data suggests has the "greatest" risk for severe storms between 3pm EDT Thursday and 5am EDT Friday.  The threat moves west to east over the time period. 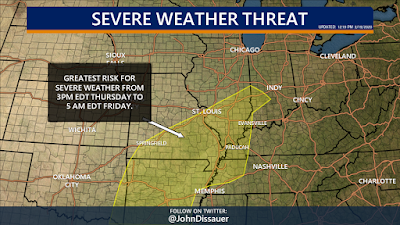 Wind appears to be the main threat from storms that develop.  However, data suggests there is a tornado threat from storms.  I've highlighted (orange) an area where I think the highest chance for tornadoes to develop.  While the window is long - from Thursday morning through Friday morning - that window is not for the entire area.  Similar to the image above, the threat will begin Thursday morning in eastern Oklahoma and spread east with storms. 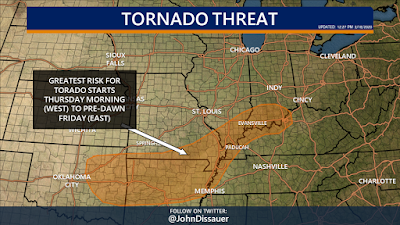 The threat transitions to late Thursday night in to Friday morning for southeast Illinois, southwest Indiana and northern Kentucky.  That means for some the threat will be overnight Thursday in to Friday.

I can't stress enough having a way to be alerted to severe weather warnings, especially late at night.  The best way is to have a working NOAA weather radio.  If you don't, it may be worthwhile to have someone stay up and keep an eye on the weather via television and wake up the family if a Tornado Warning is issued.