Indianapolis 500 moved to August; Closer look at weather conditions for the race 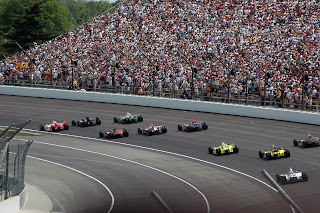 If you have not already heard the Indianapolis 500 has been rescheduled for August 23, from its usual Memorial Day weekend, this year due to COVID19 concerns.

The first thought I had after hearing the news was, "It is going to miserably hot and humid for the race."  Many fans that attend the race will say that it is often hot for the race.  In fact, there have been six race days in which the temperature has reached 90°.  Interestingly, when looking back at weather records for August 23 in Indianapolis the temperature has reached 90° on 23 days.

The biggest impact to race fans attending the race will be the humidity.  My original thought was that it would be more humid in late August compared to late May.  After combing through the data it turns out that on average the dew point temperature (measure of moisture in the air) is higher in late August than in late May.

To come up with the numbers I looked at hourly dew point data collected between Noon and 5pm on August 23 and May 30 from 1980 to 2019.  (Yes, the race is not always run on the 30th, but that is the arbitrary date I selected.)  Here are the averages for each day.