An area of low pressure is going to move out of the Rocky Mountains Friday evening.  Ahead of the low, several front will be passing through the Midwest providing areas of lift and shifting winds. 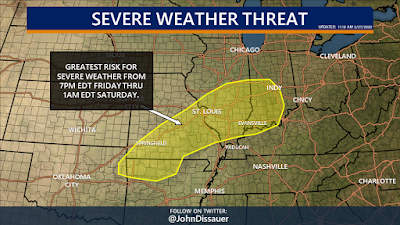 Scattered thunderstorms are expected to develop along a warm front that will lift through Indiana Friday night in to Saturday morning.  Along and ahead of the front some of the thunderstorms will have the capability of producing hail.
Some data suggests there could be a period of time when ingredients in the atmosphere could allow thunderstorms to spin along the front.  The greatest threat for this appears to be between 10pm EDT Friday and 3am EDT Saturday and primarily confined to a corridor between southwest Indiana to Columbia, Missouri.

It should start to feel more "stormy" Saturday in the Midwest.  Temperatures will be higher with temperatures in the 60°s and 70°s.  It is also going to be much more humid as dew points climb to the upper 60°s.  This will all happen before a cold front passes through Missouri, Illinois and Indiana Saturday evening through Sunday morning. 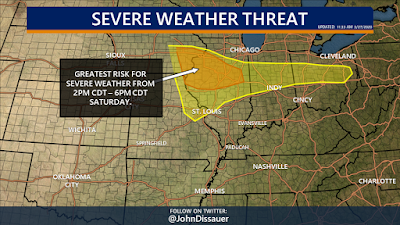 While there could be scattered showers and thunderstorms late Saturday morning, there will be many dry hours.

Thunderstorms should begin to develop in eastern Iowa and eastern Missouri early Saturday afternoon as the cold front begins to move through central Iowa and central Missouri.  Because of the atmospheric environment the thunderstorms could rapidly intensify.
A line of thunderstorms is projected to be moving east through western Illinois shortly after sunset.  The line will continue to move east through Indiana late Saturday night through early Sunday morning.

Early in the afternoon the greatest threat will be damaging wind and tornadoes in southeast Iowa and northwest Illinois, roughly from Cedar Rapids, Iowa to Galesburg, Illinois.  As the line of thunderstorms moves east the threat will be primarily damaging wind, but tornadoes and hail will be possible.  The tornado and hail threat should begin to diminish through the overnight as the line of storms moves east through Indiana and in to Ohio.

I again suggest making sure you have working batteries in your NOAA weather radios.  Also, be sure to keep your phones charged, especially Saturday evening in case there are power outages.  Some high resolution computer model data suggests there could be power outages in Indiana late Saturday night through Sunday morning.
Posted by: John Dissauer at 3/27/2020 12:23:00 PM