The snow has been pretty much nil for much of the Midwest this winter. I'm hoping we start to see the action pick up soon but looking at computer models for the next two weeks it isn't looking too promising.

It is interesting to look back to a year ago and compare this year to last year's snow cover. 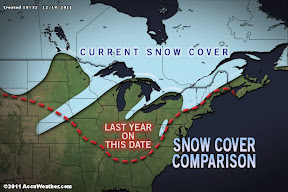 Take a look at the image above. (Click the graphic to see a larger version.). There's a pretty dramatic difference.

Temperatures were also a lot colder last year. Minimum temperatures on December 14, 2010 was 1° in Carbondale, 4° in Indianapolis and Paducah, 7° in Cape Girardeau and St. Louis. Instead this year temperatures are in the 50°'s.

So I have noticed over the past few years that it gets colder later and that snow comes later each year, and has been coming more in January and February as opposed to December. Does this support the hypothesis that the seasons are shifting?

No, it doesn't really support the idea that the seasons are shifting.

I am not sure what location you are specifically talking about but looking at snow records for Cape Girardeau doesn't support that idea.

I, for one, am hoping for a winter with no more snow than what we have already seen. Bring on more 50`s.