Weather could play an impact in SpaceX Crew Dragon launch

Latest high-resolution data suggests there may be a window between 4pm-5pm for SpaceX's Demo-2 launch today. The launch is scheduled for 4:33pm EDT. 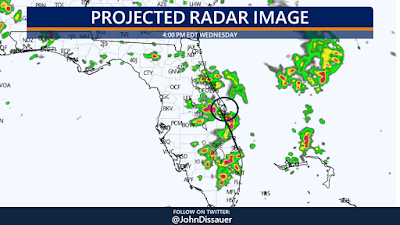 I think one of the main concerns will be convective development in the area.  That would include rain, turbulence, and lightning.  I don't know the meteorological minimums for the launch so it is hard to say with more confidence.

This launch is an important step for the United States space program.  It has been nearly 9 years since the United States launched a person in to space.  It was July 8, 2011, the final flight of NASA's Space Shuttle.

Another aspect to this being a big step is this will be the first time a person will go in to space on a commercial spacecraft.  Until now humans have only gone to space on the back of government space programs.