Here is a visible satellite image of Super Typhoon Hiayan prior to landfall in the Philippines from Thursday afternoon. 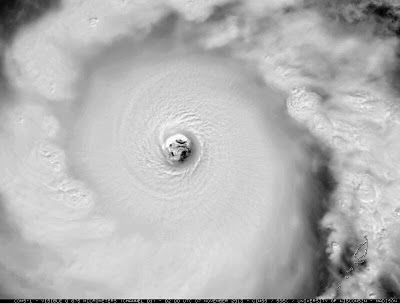 The storm is very impressive.  Here are a few factoids about the storm.

The last forecast track I saw from the U.S. Navy suggests the storm will move back out over the South China Sea and the storm will make a second landfall in Vietnam in a couple of days.

As I saw someone say earlier... This is an international storm that will require international response.
Posted by: John Dissauer at 11/07/2013 06:20:00 PM