There are fascinating numbers coming out from the computer models this morning.  I say "fascinating" from a meteorological standpoint. 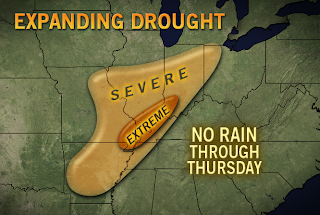 If you are needing rain, don't expect much, if any at all, over the next seven days.  Here is a break down of seven-day rainfall averages taken from two computer models for various locations across the Midwest.
As you can see, there isn't much coming.  A lot of people have been asking me "When is it going to rain?".  The bigger question is probably "When is it going to rain to enough to help with the soil conditions?".  I would like to say "There's a chance coming.", but I don't want to give people a false sense of hope at this point.  The realistic answer is "Not anytime soon."

At this point, I think it is time for people to stop concerning themselves with the lack of rain and start thinking about the upcoming temperatures. 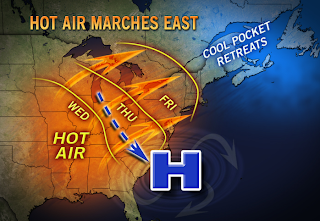 Later this week we are going to be moving in to a significant heat wave for the next week.  Temperatures will likely pass the 100° mark for much of Missouri, Illinois, Indiana and Kentucky.  In the short term, it appears that Friday will be the hottest day for parts of the region.  (Computer models are indicating Thursday will be hotter for Indianapolis.)  Here is a breakdown of various locations and the 2-meter temperature average between two computer models.
Keep in mind, the above temperatures are straight from the computer models.  They are not the actual forecast for the specific locations.  The one thing that will slightly help is that the humidity shouldn't be "terribly bad".  Don't get me wrong, it WILL be humid and heat indices will likely approach 110°-112°.

A lot of people don't realize this, but heat is the #1 weather killer.  Heat waves have been known to kill hundreds a year across the planet.

The first day or two of high temperatures isn't usually a problem, it is the cumulative heat that can be most dangerous.  Meaning that the last several days of a heat wave that usually brings problems for people.  That being the case, be sure to check on family, friends, neighbors and loved ones, especially if they do not have air conditioning or if they do not like to run the AC.

The National Weather Service office in Paducah, KY has put together a good list of safety tips for battling the heat.
Posted by: John Dissauer at 6/26/2012 01:14:00 PM

I know it was very dry in this area (Butler County, Mo.)3-4 years ago. But this year seems much worse. I have talked with some older neighbors that say it may have been this dry in maybe the late 40's or early 50's. When was the last time it was this bad in this area?

I know it was very dry in this area (Butler County, Mo.)3-4 years ago. But this year seems much worse. I have talked with some older neighbors that say it may have been this dry in maybe the late 40's or early 50's. When was the last time it was this bad in this area?