How weather can impact voter turnout on election day

Believe it or not, there are things meteorologists track that can have an impact on voter turnout. 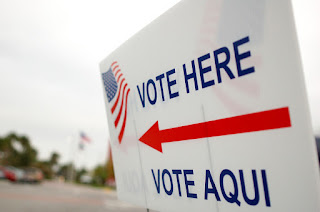 A 2007 study published in The Journal of Politics examined the impact weather has had on voter turnout for presidential elections from 1948 to 2000.  The authors of the paper state, "we find the linkage (to the weather-turnout hypothesis) not only to be statistically significant, but sometimes meaningful as well."

As an example, the 1960 presidential election was close in popular vote.  Only 119,450 votes (0.1%) separated Kennedy and Nixon.  Kennedy won the popular vote in Illinois by 8,858 votes.  There were allegations of voter fraud in Illinois during the election.  The weather was also relatively decent that day.  High temperatures were in the middle/upper 40°s across the state and light rain was recorded over the northern third.

If there had been more rain, deterring people from putting their vote in the ballot box, national results might have been impacted.  When the authors ran a simulation, taking the maximum rainfall for that election day in recorded history,  the results of the presidential election would have been different. Richard Nixon would have received an additional 106 electoral votes, thus winning the 1960 presidential election and becoming the President of the United States eight years earlier than his eventual election in 1968.

The authors also look at the opposite side.  What if there were dry conditions around the country on election day.  They found that it would have impacted the Electoral College in 1992 with Bill Clinton winning North Carolina and again in 2000 with Al Gore winning Florida, resulting in Al Gore winning the presidential election.  However, when they considered a wet 2000 election day, George W. Bush would have won by a wider margin.
Posted by: John Dissauer at 11/04/2018 01:07:00 PM