The beat of local, national, and international has been beating fast a furious over the last couple of weeks. 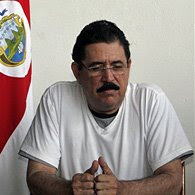 One thing I have noticed from all of the news is sometimes the lack of news from international stories. For example, have you heard much about the coup in Honduras? Probably not.

I have a couple of theories as to why there hasn't been much covered with this story. The Michael Jackson story has equaled HUGE ratings for television networks. As it should in my opinion. It is a huge story and a huge loss that has a global reach. Do I think this is a good thing? Absolutely not. International news is important, especially in a global community.

Do I see this changing? Not anytime soon. Networks are in the business of making money. Staffing foreign offices with 10-15 people and paying for the office space is not cheap.

well John I get no news now except for what I search for online, due to no channel 12 whatsoever anymore, and yes I tried EVERY SINGLE TIP and I can't afford a new antenna since my husband is laid off. I am very glad you guys put the weather updates on kfvs12.com though. melzie

That is why I have a Google News page. The celebrity death stories showed up at the top of my personalized page for about a day, but then they were moved to the "U.S." section of my page after I had not clicked on them. The Honduras coup story took its place. I still like to watch one of the 24/7 news channels, especially their morning and prime time programs, for smart political discussion. I always get my actual political news through WaPo's "The Fix" and The Politico.

John, thanks for taking channel 12 into the 21st century. I'm beginning to wonder if the US HAS an international news agency. As an avid news reader, I get most of my news via rss feeds, and social sites such as; Twitter and FriendFeed. ( I just 'followed' you on Twitter http://twitter.com/johndissauer ). I push much of what I read through FriendFeed/News-channel ( http://friendfeed.com/news-channel ), as many folks are beginning to do.

I'm looking forward to reading more from you@!